MYNDRONE is maneuvering the drone using the mind by transmitting electrical signals from the human brain also known as electroencephalography (EEG). This product can be used as a tool to improve human focus/ concentration/ brain capacity in an entertaining way. 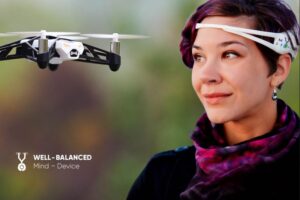 MYNDRONE is maneuvering the drone using the mind by transmitting electrical signals from the human brain also known as electroencephalography (EEG). This product can be used as a tool to improve human focus/ concentration/ brain capacity in an entertaining way.

Not long ago, brain-computer interfaces or BCIs were only a science fiction concept. Fortunately, technological advancements have allowed the hypothesis to grow into fully working still experimental technology. Initially, BCIs were designed to treat patients with paralysis. Since then they’ve progressed significantly, and the technology’s applications are expanding in new areas on a daily basis. Let’s see what Brain-Computer Interfaces (BCIs) are and how to get involved with them?

What is a Brain-Computer Interface (BCI)?

A Brain-Computer Interface provides a direct communication link between the enhanced brain network and an electronic device, allowing brain signals to be understood and read by the system. The alpha brain waves transmitted by the brain are absorbed via a sensor that is made to pick up sharp changes in potential so that any variations can be monitored. By using such technology we are able to transmit signals from our brain to other devices, paving the way in the future for controlling devices via our brain.

There are many products in the market that use the Brain-Computer Interface technology in order to create entertainment and allow new inventions to be made. Examples of such products include ones that use the neural network in the brain to simulate computers, brain-controlled virtual reality and so on.

There are two types of connections utilized in brain-computer interfaces, namely, Invasive BCI and Non-Invasive BCIs. Invasive BCI as its name suggests are BCI’s that are physically integrated where electrodes are surgically implanted under the scalp to communicate brain signals. On the other hand, non-invasive or wearable BCIs are worn on the outside of the body and can be removed. These are simple to use and do not require surgery. These are developed using technologies such as EEG technology, Magnetoencephalography (MEG), and Magnetic Resonance Imaging (MRI).

Electroencephalography (EEG) is the mechanism of detecting minor electric charges that occur in the brain’s cells which create signals on the digital device creating an interface between the brain and the computer via Brain-Computer Interface.

One such product created is the MYNDRONE. MYNDRONE is built to meet the same level of technologies used in other developed countries which have the same flight conditions and with the ability to be controlled by a mobile phone.

MYNDRONE uses the brain to manoeuvre a drone via the electric signals transmitted from the brain which is known as Electroencephalography (EEG). Started as a Research and Development project in 2020, MYNDRONE successfully completed all its test flights within not more than 6 months.

Our main objective is to introduce a fun yet intellectual product that uses an amusing and interactive way to increase concentration and brain activity to advanced levels. This is because MYNDRONE can enhance one’s concentration, focus and capacity without stressing the person in control.

In addition, we aim to provide an innovative way in which people can use such technology to easily connect with other products as well in a real-time environment. This includes controlling a prosthetic arm to a battle robot just via our brain signals.

How Does It Work?

The user wears an EEG headband, which is processed in real-time using state of the art signal processing techniques to identify the state of the brain’s activity. Then according to the preferences that are premeditated, these signals are mapped into different flight conditions for the drone using the interface. As of now, the flight conditions that can be mapped to EEG signals are; drone take off, the height of the flight and landing. Further, the left-right movements of the drone can be mapped based on eye blinks and head movements.

This method is said to be highly entertaining and a perfect exercise to improve one’s concentration levels. This is especially evident in helping kids with attention deficit disorders like ADHD to improve their concentration.

As MYNDRONE uses Brain-Computer Interface and the drone controller together, it provides unique controls and makes it novel. Moreover, MYNDRONE is incomparable to other products in the market when it comes to the drone’s flight conditions which consumes mind energy to the least, without making the user exhausted.

In 2021 January, MYNDRONE completed the initial stage of product development and testing. Its Beta Testing will be planned out with the engagement of the public, from the youngest to the eldest in the community. We hope this allows us to identify the best market segment for MYNDRONE and how the brains of different ages and health functions and communicates through technology.

The next major step in our plan is to apply Bluetooth and 5G technologies in different applications of MYNDRONE for a premium user experience. It is expected to use EEG signals in our Research and Development arm further to create similar products that can support people’s wellbeing and quality of life.